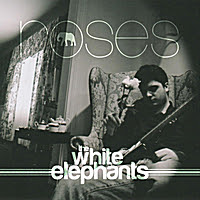 The White Elephants – Roses (Canal Records)
Background info concerning The White Elephants is decidedly patchy. I know for sure Anthony Moscatello is the main man, writing, arranging and performing, though whether other musicians are present on certain tracks, I don’t know. From what I can glean online, “Roses” is the debut long-player, and something I can confirm with absolute certainty is the album’s unerring quality from beginning to end. Furthermore, if it is just Moscatello, then I’m doubly impressed; so for now I’ll stick with the one-man-band theory – it makes for a better tale.

Listening to the record, the overall impression is not unlike Richard Hell fronting a shabbier, looser White Stripes, which sounds as good as it looks written down. The mix of garage blues with early New York punk rock is inspired, even when he applies it to other people’s songs. Indeed, his version of Beefheart’s “Sure 'nuff 'n Yes I Do” is superb and he roughs up Leiber and Stoller’s “Riot in Cell Block #9” in a way that’d make Dr. Feelgood blush.

As good as they are, it’s the original songs that impress the most. “The Place We Knew” kicks open the door with raggedy gusto, before becoming a perfect blast of punk-blues-pop. If it were out on 7” single you’d save every penny you earned to buy an old jukebox to play it on. “Think Twice” is just as good, with the added bonus of some slash ‘n’ burn guitar that’ll remind old’ns of James Williamson’s lead on The Stooges’ “Search and Destroy”. If you’re attracted to the dark side of the street, then try and hear the noirish “Nevermind Blues”, which will probably secure Moscatello a berth in the Bad Seeds should there ever be a six-string vacancy.
www.facebook.com/TheWhiteElephants
www.thewhiteelephants.com
www.youtube.com/TheWhiteElephants
Simon M.

The White Elephants – The Place We Knew