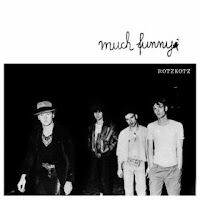 Rotzkotz - Much Funny (Sireena Records)
For those that were there, German punk band Rotzkotz’s six week residency in the spring of 1978 at Nuneaton’s notorious ’77 Club remains the stuff of legend. They quickly established themselves as the most provocative support act of their day, inciting eager audiences who had turned out early for local luminaries The Crones, The Seamen and Bulkington’s roots reggae royalty, Mr Whippy. In turn, Rotzkotz spawned a tribe of their own, providing black pudding suppers at free gigs on Thursday nights and Sunday lunchtimes; and three weeks in, the blank generation were flocking from as far afield as Old Arley and Barnacle for a taste of their exotic fruit.

Inevitably, and in tune with the times, every high was matched with a deeper low. In the end it wasn’t the spilt blood or the structural damage that saw their tenure revoked and their persons given a police escort to the ferry, but the women. While Camp Hill’s Karen Deeming and Blackatree’s Sandra McTragic fought like cats on the dance floor for the attention of the blond haired blue eyed lead singer, the tandem ministrations of Stockingford identical twins Shelley and Marsha Grubb interfered with the drummer’s rhythm to disastrous effect. The deterioration of artistic quality might have escaped unnoticed, but the spectacular mid-encore arrival of Mrs Valerie Pugh, mother of the thirteen year-old Joan, with two older brothers, the priest, and the local bobby in attendance, did not. Ironically it would be the twelve song main set the band completed on that fatal final night that went on to form the basis of their sole vinyl LP, cut in 48 hours at a studio in Lower Saxony a full year later, once the band members’ respective debts to society had been paid in full.

It could have been so different. If all this were true, Rotzkotz would live forever in our collective cultural memory of the Punk Wars (not to mention the chiselled features of Mrs Pugh’s great-grandson, Helmut) growing more illustrious with passing time, regardless of merit. Instead, (to the best of my knowledge) they never made it to the UK at all. They never supported The Crones or The Seamen, and the Queens Road, Nuneaton (where the’77 Club would go on to host The Lurkers, The Rezillos and U2 for its sins) never became their Reeperbahn.

‘Much Funny’ was indeed cut in Lower Saxony in 1979, and contains twelve tracks of authentic, angry, lo-fi punk which has dated no better and no worse than much of the local label stuff of the period which is still surfacing from lofts and garages and being transferred to digital for re-issue as we speak. It stakes a claim to being the first self-produced German punk record and a precursor to the Hanover rock scene, and who can argue; but sadly, without the myths and legends that still endure for many of our own also-ran new-wavers, there isn’t much of a hook for UK listeners to hang their hats on. Perhaps though, if we all agree to stand by the tall story above, and if we wish really hard, we can create enough of a fable to enshrine Rotzkotz, even at this late hour, as our favourite German D.I.Y. punk band of all time.
www.sireena.de
Neil B.