London 2012: Alfred Hitchcock silent films to be celebrated by BFI... 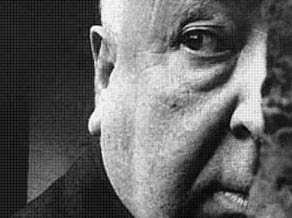 The British Film Institute has revealed details of its celebration of filmmaker Alfred Hitchcock, which includes restorations of his silent movies.

Champagne and Blackmail, which were directed by the British master of suspense during the late 1920s, will be shown with live musical accompaniment.

A three-month long season will also see all 58 of his films - including Psycho, Vertigo and The Birds - screened.

Speaking at a launch in London on Tuesday, film critic and chairman of the London Film Critics' Circle, Jason Solomons said: "What strikes me is the modernity of the project.

"We're seeing him now as a cool indie British film-maker."

An open-air screening of Blackmail, directed by the 30-year-old Hitchcock in 1929, will be staged in the forecourt of the British Museum on 6 July as part of the BFI's involvement in the London 2012 Festival celebrations.

The film will feature a live score composed by award-winning composer, musician, writer and broadcaster Neil Brand, performed live by an ensemble of 18 musicians.

Hitchcock's 1927 work The Ring will be shown at the Hackney Empire, with jazz musician Soweto Kinch providing live music and fellow Mercury prize nominee Nitin Sawhney will score The Lodger: A Tale Of The London Fog.

Solomons added: "Music is the first step to re-framing how we see cinema.

"There are different strains of world music and it proves that his films belong to all of us."

Both The Ring and Champagne will be screened live on The Space - a digital arts service which has been developed by Arts Council England in partnership with the BBC and BFI.

The BFI on London's South Bank will also house an exhibition paying tribute to Hitchcock who died aged 80 in 1980.

Over his career, spanning six decades, the iconic director was nominated for five Oscars - but won just one honorary statue in 1968.