Review: Susan Hurley and the Hurricanes 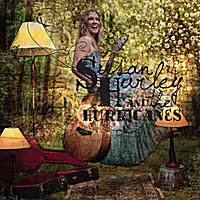 On one of the band’s social media pages, they list their only group interest as “bad jokes”. I don’t hear any jokes on their new EP, good, bad or otherwise, though I do hear a contemporary Australian folk rock band coming to terms with the legacy of Joni Mitchell, Sandy Denny and Jacqui McShee, together with the latter pair’s respective ensembles. All three make regular visits to my CD player, so it’s a thrill and a pleasure to hear a new group take on those huge influences and emerge with something so vibrant and alive.

There are only a half dozen tracks on their debut EP, so perhaps it’s a little unfair to lay the future of folk-rock at their doorstep, but my goodness, they show promise. Susan Hurley’s not-quite-pure voice leads these songs in strange directions and the Hurricanes aid and abet with arrangements that avoid cliché. They begin with “Where My Eyes Lead”. Its faintly askew rhythm asks much from the singer, but Hurley is the guiding light, her voice providing both structure and depth, whilst James Menzies’ double base is fluid and mobile. Additionally, guitarist Christopher Dale’s solo is unexpected and surprisingly muscular. “In The Middle” sees them incorporating ska and reggae influences, but also a smidgen of Midnight Oil’s alternative rock, and the effect is acute. Perhaps best of all is “Trapped in This Cage”, as it falls somewhere between the easy flow of prime-time ‘70s Grateful Dead and the drama of Fairport Convention’s epic texts.
www.facebook.com/pages/Susan-Hurley-and-the-Hurricanes
Rob F.