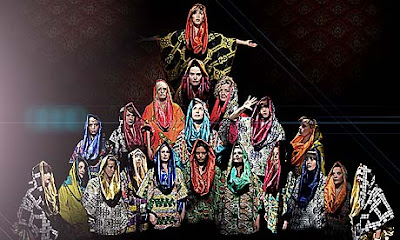 Riotous 21-strong female choir Gaggle are ready to unleash their debut album, ‘From the Mouth of the Cave’ on June 4th through Transgressive Records. Their lead single, ‘Army of Birds’ will be released on May 21st.

Led by Deborah Coughlin, Gaggle started as a vision, a vision of a mass of women onstage, and this is exactly what she has achieved alongside her writing-partner Simon Dempsey. Now, the story continues with this thrilling, sonorous and unique debut.

Formed in late 2008, Gaggle has continued to grow, from playing their first gig at Club NME, Koko, to being named as one of NME’s Top 50 Innovators and opening French festival Trans Musicales. Imagine the Spice Girls and Marina Abramovic on Motley Crue’s tour bus and you’ll have a vague sense of the spirits that saw the girls banned from Reading Festival, albeit only for 45 minutes. Britain’s Got Talent even wanted to get in on the act, but this missed the point. Gaggle aren’t a novelty act. They mean business.

“I’d always known where it would go – I knew it was a project that could cross boundaries and play in vastly different spaces,” Deborah says and this became all the more apparent with the Gaggle’s next step.

Deborah undertook a reworking of the 1969 opera ‘The Brilliant and The Dark’ – originally performed by 1000 women at the Royal Albert Hall – and took it around Europe before returning home in 2011. This project transformed perceptions of Gaggle from novelty to cultural force, leading to a performance on Jools Holland with My Morning Jacket and a documentary in the works.

‘Combined with the striking vocals, ‘From the Mouth of the Cave’ conjures up images of a futuristic carnival or celebration. It tells us their stories: about trying to be powerful in a group (on forthcoming single ‘Army of Birds’), about being alienated (‘Lullaby’), about economics (‘The Power of Money’), about leaving things that aren’t good for you (‘From the Mouth of the Cave’).

Gaggle is not an act of positive discrimination nor simply a feminist collective. It’s not even a cohesive unit – except in that moment of performance, where it’s an army in uniform.

What Gaggle is however, is something different, something exciting and completely now.