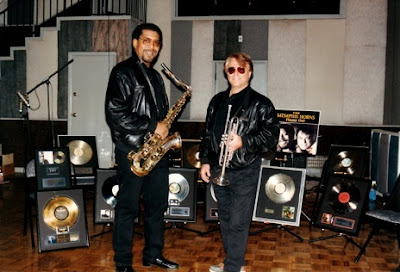 They played together on 52 number one records, backing up the likes of Elvis Presley, Aretha Franklin and Otis Redding.

They were awarded the Grammy Lifetime Achievement award in February.

Willie Love said her husband died at his home on Thursday. He had been suffering from Alzheimer's disease.

Other acts the duo worked with included Isaac Hayes, the Doobie Brothers, U2, Jack White and Alicia Keys.

The Memphis Horns were a staple of much of the music made at Stax Records - considered one of the most important R&B and soul labels of the 1960s, along with Atlantic and Motown.

"I knew we would be perfect together," Wayne Jackson said in a statement on Friday.

The collaboration and friendship between Love and Jackson - one black, the other white - also came to symbolise a transcendence over racial divisions throughout the South and beyond in the 1960s.

Memphis Horns were only the second instrumental backup group in history to receive the lifetime achievement Grammy honour.

In 2008, the pair were also inducted into the Musicians Hall of Fame.

In addition to his wife, Love is survived by four children.