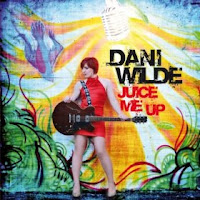 Dani Wilde - Juice Me Up (Ruf)
We’ve passed previous comment on the impressive wave of young female singer/guitarists that have set out on the blues road in recent years. On past form Danni Wilde has been at the forefront of the trend, attracting plaudits from across the media for her delta-inspired gutsy playing, littered with convincing references from Buddy Guy to Stevie Ray Vaughan. For ‘Juice Me Up’, however, she seems to have undergone something of a transformation, which will challenge even her most committed audience.

Before the disc hits the deck both the album title (a possibly tongue in cheek but undeniably lascivious offer of sexual favours to young buck Oli Brown) and the sleeve (on which the mini-skirted Miss Wilde seems to be imaged as a sort of psychedelic Cilla Black) forewarn that a change is gonna come. This is not to cast aspersions on the quality, per se, of what lies within – it’s actually a very tasty soul album with real sensitivity to its sources – but she’s certainly not the girl she was. So instead of the crisp and crunchy blues licks and throaty vocals of yore, we get a Millie Jackson for the modern age, very capable of channelling Prince (re-writing ‘Kiss’ on opening track ‘Don’t Go Making Me Cry’), Aretha (‘Walk Out the Front Door’), Jackie Wilson (‘Let Me Show You’), Marvin (‘Crazy World’), Smokie, (‘Juice Me Up’), and so on, presumably until she’s stood up to the entire Stax and Motown songbooks and beyond.

Rarely does the old blues woman surface, and even then (on ‘Mississippi Kisses’) it’s to showcase it within the wider soul spectrum. Don’t get me wrong, it’s good stuff if you go for that sort of thing, and its sometimes great. Bonus track ‘I Will Be Waiting’ could easily be a Bill Withers hit, and when she deploys driving heavy funk grooves on ‘The Burning Tree’ to make a no-holds-barred statement on last year’s inner-city riots she demands comparison lyrically and musically with Sly Stone, James Brown and other black commentators on sixties civil strife. No complaints then, just an observation that this is a drastic shift, and an open question as to what has brought it all on.
http://www.rufrecords.de/
Neil B.