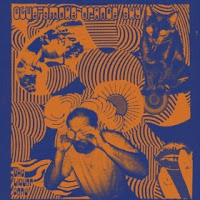 Bad Liquor Pond - Blue Smoke Orange Sky (MT6 Records)
Be fair, with a name like that you wouldn’t expect anything other than a deep dark broth of weed and acid soaked stoner rock would you? And quell surprise, you’re not about to be disappointed.

Heavy psychedelic music wasn’t really supposed to outlive the 13th Floor Elevators, but like some sonic vampire it seems hell-bent on living forever. Baltimore foursome Bad Liquor Pond have certainly studied their craft, and if you open your mind to this stuff then all sorts of sounds from early Pink Floyd through Hawkwind to Spacemen 3 and Comets on Fire, seasoned with a splash of Grateful Dead, Moody Blues, George Harrison even (‘Great Planes’), will float in.

In fairness they avoid the obvious pitfall of anachronism very well, and for all the historical references that can be implied, they stand up well against contemporaries such as Howling Rain or Dead Meadow, ensuring their enhanced mind-bending grooves retain a modern cutting edge. ‘New Reality’ and ‘Apocalyptic Love Jam’ both contain some excruciatingly lovely scrunched-up guitar playing which demands we should all dust down our Jefferson Airplane albums and give Jorma Kaukonen a fresh hearing, but for now there’s something here to please the cosmic consumer of any generation.
http://www.mt6records.com/
Neil B.