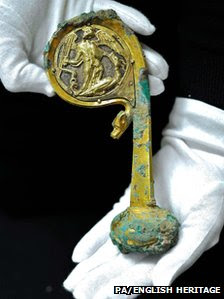 Rare treasure found by chance in a grave in south Cumbria is to go on display at Furness Abbey after lying undiscovered for more than 500 years.

A silver-gilt and copper crozier and a jewelled ring were found in 2010 and said to be in a "remarkable condition".

They were discovered in the undisturbed grave of a mystery abbot thought to be one of the heads of the monastery.

Situated in the presbytery, seen as a prestigious position in the church, his grave could date to the 1150s.

Kevin Booth, senior curator at English Heritage, said: "This is a very rare find which underlines the abbey's status as one of the great power bases of the Middle Ages.

"While we don't yet know the identity of the abbot, he was clearly someone important and respected by the monastic community.

"Given that the crozier and ring have been buried for over 500 years, they are in remarkable condition."

The head of the crozier is made of gilded copper and decorated with gilded silver medallions showing the Archangel Michael defeating a dragon.

Experts have been unable to pinpoint the exact date of the grave, but believe it to be anywhere between 1150 and the 1500s.

Founded in 1124 by Stephen, later king of England, the monastery was originally located at Tulketh, near Preston, but the monks moved to Furness in 1127.

The abbey, now looked after by English Heritage, first belonged to the Order of Savigny and then to the Cistercians.

A crozier or crosier is a kind of hooked staff or shepherd's crook carried as a symbol of office by senior religious figures.