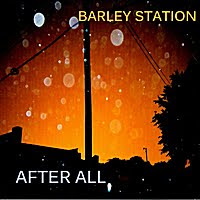 Barley Station - After All (Barleyfields Records)
There’s an abundance of creative talent in Barley Station, as no fewer than three members - Randy Wayne Belt, Brian Kious, and Emily Thomas – write and sing. Together they blend alternative country and rootsy folk-rock into a style that has all the pop appeal of the classic Jayhawks records, but remains earthy and resolutely unpolished. It’s a win / win for me, and I’m sure they’d appeal to both No Depression readers and fans of first generation country rock; they just need to be heard.

That can be remedied by visiting their website (link below), and if you do, be sure to pay special attention to “Can't Sleep for Venus” which builds tension and hits emotional peaks like a classic Roy Orbison number. “Dream You Lost” indicates harmonic qualities usually only found in siblings and “Abilene” is arranged beautifully, it’s unhurried and spills its secrets one at a time. They can rock it up too, and “Cobalt Blue” might be the best example. If it were 1991 it might’ve sat on a mixtape between Tom Petty’s “King’s Highway” and Uncle Tupelo’s “Graveyard Shift”, and it would’ve sounded great.

As it is with all great underground music, the listener’s got to be pro-active, and go find it. I hope lots of people find Barley Station, because there are too many ‘great lost bands’ already; we really don’t need another one.
http://barleystationmusic.com/
Rob F.