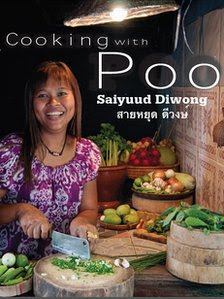 A Thai cookbook has won this year's Diagram Prize for oddest book title of the year.

Cooking With Poo is written by Bangkok chef Saiyuud Diwong whose nickname is Poo - which is Thai for "crab".

She runs a cookery school for locals and tourists in the city's largest slum, alongside the charitable organisation that published the book.

The 114-page book beat six other titles to be voted the winner in a public vote on The Bookseller's website.

Voted in second was Mr Andoh's Pennine Diary: Memoirs of a Japanese Chicken Sexer in 1935 Hebden Bridge by Stephen Curry and Takayoshi Andoh.

While Scott D Mendelson's The Great Singapore Penis Panic and the Future of American Mass Hysteria came in third.

"We knew the whole world loved Poo but now its official!," said Anji Barker, a senior social worker at the charity Urban Neighbours of Hope.

"Poo has sold 6,000 books and her classes are fully booked out. She is not just helping to raise her own family out of poverty, but is employing 20 other poor slum residents.

"She is an amazing lady with an amazing programme - thanks to everyone who voted."

Saiyuud Diwong added: "Thank you everyone. I am lucky to have such a funny nickname, it helps my business a lot!"

The other shorlisted titles were Estonian Sock Patterns All Around the World, The Mushroom in Christian Art, A Taxonomy of Office Chairs and A Century of Sand Dredging in the Bristol Channel: Volume Two.

The Bookseller's Horace Bent said: "Given that, this year, the three most voted-for works contain the words 'poo', 'sexer' and 'penis' in the title, it appears that this year's prize will go down in history as a blue year.

"But there is nothing wrong with that. Many of the world's greatest writers have dabbled in off-colour humour, so I find Cooking with Poo a fitting winner."