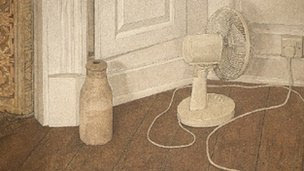 A work featuring an electric fan has been named the winner of this year's Lynn Painter-Stainers Prize.

Antony Williams, who created the painting Still life with electric fan, scooped the main prize of £15,000.

The young artist award of £2,500 was presented to Naomi Grant for Self Portrait.

The awards, which have been running for seven years, are designed to "encourage creative representational painting and promote the skill of draughtsmanship".

They have also selected 98 works, which will be exhibited at the Mall Galleries in central London from 28 March, before moving to the WH Patterson Gallery on 23 April.