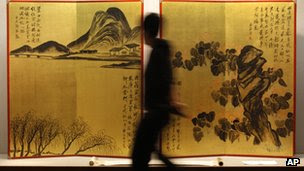 China has overtaken the US as the world's biggest market for art and antiques, according to The European Fine Art Foundation (TEFAF).

Having knocked the UK down to third place in 2010, figures for 2011 show China had a 30% share of the market based on both auction and dealer sales.

Dr Clare McAndrew, who compiled the report, described it as a "fundamental and important" change.

"The dominance of the Chinese market has been driven by expanding wealth, strong domestic supply and the investive drive of Chinese art buyers," she said.

But she warned there would be challenges ahead for the various regions in 2012: "The Chinese market in how to cope with an overheated market and promote more stable, long-term growth; Europe, with how to maintain its competitiveness in the face of continued regulatory and cost burdens; and the US with the challenge of losing its supremacy in the recent past."

The US took 29% of the market, according to the latest report. The UK remained in third position with a 22%, while France was fourth with 6%.

Rachel Campbell-Johnston, chief art critic at the Times, told the BBC: "People have been talking about China for a long time now and it's particularly strong in the areas of contemporary and modern art."

She added: "The dominance of China is simply reflecting a shift in the global economy."

Campbell-Johnston believes that simple supply and demand is at work: "There's only so many old masters that come on the market these days, so if you have enough money to buy one, it's a huge badge of importance. The Chinese and the Russian oligarchs are fighting over them - which makes it sound like a James Bond movie."

It is not just auction houses who have been opening up in China - White Cube, which championed high-profile contemporary artists like Damien Hirst, opened its first gallery outside London in a limestone-clad, 31-storey skyscraper in Hong Kong's financial district last week.