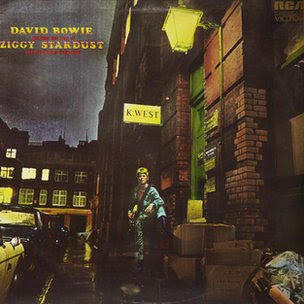 A blue plaque has been unveiled in the West End of London to honour the singer David Bowie.

It marks the spot where he was photographed for the cover of his album, The Rise and Fall of Ziggy Stardust and the Spiders from Mars.

Photographer Brian Ward took the picture of Bowie in Heddon Street in 1972.

Spandau Ballet's Gary Kemp said the album's influence was about more than music.

Kemp, who unveiled the plaque, said: "It's really about this character Bowie created.

"It was a conceptual art piece he was trying to sell through popular culture - and it worked.

"Ziggy came out of a much darker impoverished London - it offered a great means of escape for an adolescent generation that was still in the shadow of the Second World War."

Music critic Pete Paphides said: "Bowie was a self-made creation and the attention to detail is amazing.

"He created this character and it was so startling at the time.

"It was very forward looking."