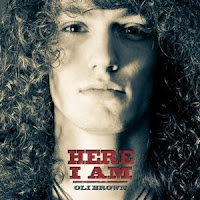 Oli Brown - Here I Am (Ruf)
Oli Brown’s two previous outings, 2008’s ‘Open Road’ and 2010’s ‘Heads I Win, Tails You Lose’ have been rightly appraised as work of a young musician mature beyond his years and full of promise. New release ‘Here I Am’ continues the good work, initially in like manner with rounded and well-crafted grooves wrapped around infectious tunes. Neither the heavy-hitters such as ‘You Can Only Blame Yourself’ and the opening title track or the more plaintive numbers including ‘All We Had To Give’ will disappoint his growing fan base.

The turning point comes with what in the olden days would have been the start of Side Two, as the steady rhythms of ‘Devil in Me’ build almost imperceptibly into a roaring finale, before giving way with an abrupt jolt to the silken soul of Donny Hathaway’s ‘I Love You More Than You’ll Ever Know’. This is Oli Brown as we’ve only glimpsed him before, more versatile, more confident and more individual, shaking off the lazy Hendrix/Stevie Ray comparisons to claim the high ground in his own right. When he returns to the more familiar blues grit of ‘Remedy’ and the sleazy funk of Nikka Costa’s ‘Like A Feather’ there seems a fresh spring in his step, and even ‘Mr Wilson’, his audacious take on southern-style swamp rock is carried off with considerable aplomb.
http://www.oliselectricblues.co.uk/
Neil B.