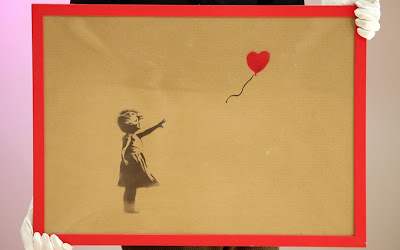 A collection of works by graffiti artist Banksy have sold for more than £400,000 at an auction in London.

The image has been painted directly onto the cardboard backing of an Ikea frame.

The stencil painting Leopard and Barcode, which has never been under the hammer before, sold for £75,650.

In a separate sale at the auction house, a screen print of a dollar sign by American pop artist Andy Warhol sold for £44,450.

Initially painted onto a handkerchief and given to friends in 1981, the picture has since been mounted onto board.

The sale appears to contradict claims, earlier this week, by art critic and former curator Julian Spalding - who predicted the bottom would soon fall out of the contemporary art market and conceptual work by high profile artists would become "worthless".

Writing in the the Independent newspaper, he said he had coined the term "con art" which is "short for contemporary conceptual art and for art that cons people".

"The contemporary art market is very strong at the moment both in terms of the domestic, international and growth markets," he said.