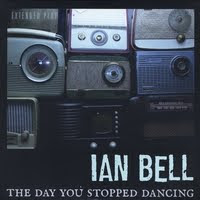 Ian Bell - The Day You Stopped Dancing (Independent)
Originally from West London, but now residing in Santa Cruz, California, singer-songwriter Ian Bell’s second EP “The Day You Stopped Dancing” may draw inspiration from classic American singer-songwriters like Bob Dylan and Tom Waits, but his style remains very English, and seems equally informed by Richard Thompson at his most strident, the outsider genius of Kevin Coyne, Peter Hammill’s solo venting and post-punk acolytes such as Kevin Hewick. It’s incredibly effective. The instrumentation is kept to a minimum, allowing Bell’s voice to ring out clear and strong.

Though consisting of only five tracks, “The Day You Stopped Dancing” clocks in at close to 30 minutes in length. Bell’s uncomplicated approach to the backing allows space to stretch himself as a songwriter, and both “If This Is What You Get” and “Springs” are close to seven minutes long; the former wouldn’t have sounded out of place on an early ‘80s Cherry Red compilation and the latter is the sprightliest tune on the record, and closes proceedings most satisfactorily. The song I return to most frequently is the title track, its arresting imagery, vibrant arrangement and bone-dry delivery is something worth taking the time to engage with properly.
http://ianbellacoustic.com/
Simon M.