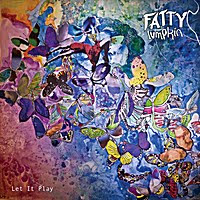 Fatty Lumpkin - Let It Play (Independent)
First formed in 2000 and gigging since 2003, Fatty Lumpkin has gained plenty of experience on their voyage of musical endeavour, and they’re not afraid to let it show. Their latest release, the four-track EP “Let It Play” oozes professionalism, from the airtight production to their complete ease mixing styles and flavours to create a streamlined whole.

Opening cut, the instrumental “Spy Hunter” borrows from ska and funk, as well as King Tubby and Augustus Pablo inspired dub, and inevitably it’s Seth Myers’ fearsome bassline that’ll grab the headlines. It’s followed by “Irresistible”, the sort of muscular, sassy funk rock that Hendrix pioneered and Lenny Kravitz popularised in the ‘90s; Fatty Lumpkin’s model falls somewhere between the two. “Gloria” is all about the rhythm, a New Orleans beat and a good time buzz. They wrap things up with a nine-minute instrumental, “True Romance”. Reggae bass and rock guitar powerfully sync, and by the time the jazzy bits arrive, you’ll already be a convert.
http://www.facebook.com/FattyLumpkinMusic
Rob F.