Amazon's Kindle Touch comes to Europe, but no Fire news... 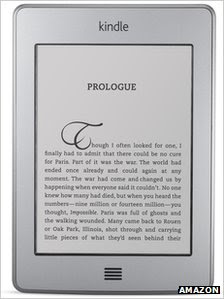 Amazon is launching a touchscreen version of its Kindle e-reader in the UK, Germany, France, Spain and Italy.

The Kindle Touch will be available for delivery from 27 April, five months after it went on sale in the US. Unlike in America, there will not be a discounted version with adverts.

The device aims to challenge touch-based e-readers from Kobo and Sony.

Amazon had no update on a European release date for its bestselling Kindle Fire Android-based tablet.

The Touch is being sold for £109 with wi-fi, and £169 with both wi-fi and 3G connectivity, with no monthly fee. Both options allow books to be bought "on the go" from Amazon.

The device also contains an "experimental" web browser, but it only works with a wi-fi signal.

The e-reader is 70 grams (2.5 ounces) heavier and slightly larger than the basic Kindle model, which is sold for £89.

However, it also offers an "x-ray" feature - exclusive to the device - which lets users to find related passages in a book as well as more detailed information from Wikipedia and Amazon's community-written book encyclopaedia "Shelfari".

The latest version of its operating system will allow books to be read in both portrait and landscape mode. US-owners had previously been restricted to holding the device vertically and had pressed Amazon to make both options available.

Amazon said UK readers will have access to more than one million books including the Harry Potter series, which has just become available to the firm and its rivals.

"It is the best-selling e-reader in the world, but the comments that we got back... were 'we wish it had touch', and so we're excited now to bring this to the UK market as well."

Mr Van der Meulen would not explain the reason for the gap in launch dates. He also confirmed that European users would not be able to lend books to each other or borrow titles from public libraries as they can in the US.

When asked about the Kindle Fire - which shipped on 14 November in the US - he said: "We generally don't talk about upcoming products or future plans."

Gadget site, Pocket-Lint's editor was not convinced many users would want to pay a premium over the entry-point Kindle, which uses push-buttons to change pages.

"The basic version sold like hot cakes at Christmas and it is likely to remain the market leader," said the site's founder Stuart Miles.

"You don't really need to touch a book to make the pages turn when a button does the same, and for another £20 that's basically all you are getting."

In the US, the Kindle Touch faces competition from the Nook Simple Touch, which is sold ad-free at a cheaper price, and the Nook Color which can screen movies and television shows.

There had been rumours that the rival e-readers might soon launch in the UK after their maker - Barnes & Noble bookstores - sponsored an event for developers in London earlier this month.

However, the firm's senior vice president of communications, Mary Ellen-Keating, told the BBC: "We have nothing to announce at this time."