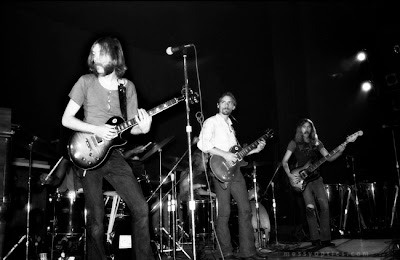 The group's debut and sophomore albums, released in 1969 and 1970 respectively, had achieved relatively low sales outside of the southern states, but reviews were generally positive and American critics, particularly those writing for the by then almost biblical Rolling Stone, had come out in favour of the Allmans. But it was to be the marvellous live set recorded at New York s Fillmore East in March of '71 that would provide for the commercial breakthrough that turned the group from local curios into national treasures.

The album, simply titled At Fillmore East, went on general release in July and both the critical reception and the sales were phenomenal. The road was where the Allmans had paid their dues and built up their core audience, and it was this same platform upon which the band and their managers knew they must now promote both band and record in the wake of their new found celebrity. So, back in New York a month after the release of Fillmore East, The Allman Brothers Band pulled up outside the city's A & R Studio on August 26th, to perform a show but one not just for the enjoyment of those fortunate enough to secure a ticket, but also for those within earshot of NYC s legendary radio station WPLJ FM, who were lined up to transmit proceedings live across the airwaves.

The resultant broadcast is presented on this CD, available legitimately for the first time. A favourite of many tape and rarities collectors, the quality, dynamic performance and ambience encompassed herein all at once make for a quite staggering sonic experience, one that fans of this legendary act in its original line-up will relish alongside the group s other essential releases. Two months after this remarkable show went out, Brother Duane Allman, one of the world s finest ever rock and blues guitarists, was tragically killed in a motorcycle accident. Little more than another year on, in November of 1973, ABB bassist Berry Oakley sustained a similar fate in a separate crash, just three blocks from Duane's fatal accident spot.

This release showcases one of the final appearances of the original Allmans line up and remains not just a delightful listening experience but additionally serves as a fitting tribute and historical document to the legacy of this iconic American rock group.