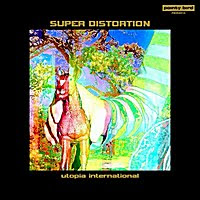 Super Distortion - Utopia International (Pointy Bird Records)
Pete Bradley is Super Distortion; he’s also Man In Formaldehyde, Art Giraffefungal, half of Cephalapod and a quarter of ddjomp – but that’s beside the point. This particular project was named after a favourite fuzzbox pedal and was originally an instrumental venture. The “Into Space/The Mystery Prize” single introduced a songwriting and lyrical element, and subsequent support (and airplay) from Stuart Maconie on his BBC6 Music Freakzone show indicates the change of direction was well judged.

There’s been a tradition in the UK of spacey psychedelic rock with a distinct pop edge since the late ‘60s when The Stones released “Satanic Majesties” and Syd Barrett’s Floyd took it to another level. Hawkwind consolidated and Nick Saloman’s Bevis Frond picked up the baton, and has yet to stop running. It seems inevitable that Super Distortion should be added to the list. Songs like “Beautiful Life”, with its heavy Neil Young-esque guitar and “Mr Spock”, which riffs like early Black Sabbath fronted by Julian Cope, can cope happily with the association. Not that Bradley concentrates wholly on the louder end of the genre. Folkier material like “The Golden Rule” sits easily among the heaviness, and “Can You See the Patterns?” with its spoken word introduction, pulsing rhythm and space-pop chorus might be my current favourite. If any of this sounds vaguely appealing, I can only recommend you investigate further, without delay.
http://www.pointybirdrecords.co.uk/
http://www.facebook.com/superdistortionmusic
Rob F.