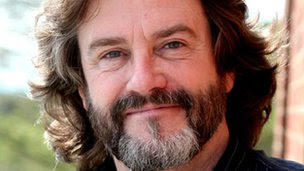 Gregory Doran is to take over from Michael Boyd as artistic director of the Royal Shakespeare Company.

Doran, who joined the company 25 years ago - as an actor - is currently chief associate director at the RSC.

Boyd said he was "pleased to be leaving the Company in such good hands". "He is a first rate director, and nobody knows and loves the company more than him."

Doran hailed his "long-term commitment ... to the astonishing plays of our 'Star of Poets', William Shakespeare".

Doran - who won an Olivier award for outstanding achievement for the RSC's season of Jacobean plays in 2002 - will take over from Boyd in September.

"I am delighted to be appointed as artistic director of this great company," said Doran.

"Michael Boyd and Vikki Heywood have done an exceptional job in the last decade, rebuilding the theatre and reasserting the principles of ensemble and collaboration, which I hope to continue and extend."

"My first task is to assemble an exciting new artistic team, with whom I shall start planning the Company's future from 2014."

Critically acclaimed productions for the RSC include Patrick Stewart and Harriet Walter in Anthony and Cleopatra in 2006, and Love's Labour's Lost, starring David Tennant, in 2008.

Doran was also instrumental in bringing his 2000 production of Macbeth - starring his partner Anthony Sher in the title role - to Channel 4, while his 2008 production of Hamlet, starring David Tennant, was broadcast on the BBC.

His predecessor Boyd is credited with reviving the fortunes of the RSC which was debt-written and demoralised when he took over in 2002.

Success stories include his year-long Complete Works festival in Stratford-upon-Avon, and the award-winning musical Matilda, which transferred to London's West End last year.

He also oversaw the £112m renovation project to the Stratford-upon-Avon theatres and the RSC's 50th birthday.