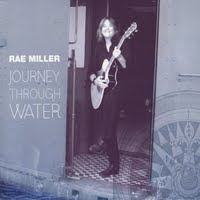 Rae Miller - Journey Through Water (Independent)
There’s not a great deal of biographical information available about Rae Miller – not in the usual places anyway, and I’d feel uncomfortable hacking her medical records and bank account. Not to worry, I think I’ve found the pertinent bits. She began her musical journey playing classical violin and the family guitar, she wrote songs, just for herself and for creative release, and she allowed herself the freedom to explore different styles and genres. When she realized that she’d like to record and share her songs, “Journey Through Water” was the result, a debut record that isn’t afraid to mix things up, but still manages to consolidate its sound and come together as a satisfying whole.

Mostly that’s down to Miller herself, as she possesses a voice that reminds me simultaneously of Carla Olson and Tracy Chapman. Opening track “Got My Ticket Blues” sets the scene, and makes a statement regarding musical intentions. It’s followed by the country-tinged shuffle of “Rodeo”, with Eric Moon adding some supportive piano. “Rain” shows Miller’s vocal range, and deserves to be heard at primetime on just about any grown-up radio station you’d care to mention, and “Desert Trip” may be backed with what sounds like an electronic Latin beat, it still errs appealingly towards melancholy.
http://raemillermusic.com/
Rob F.