Dave Alvin & The Guilty Ones - live in Leicester at the Musician on April 15th‏... 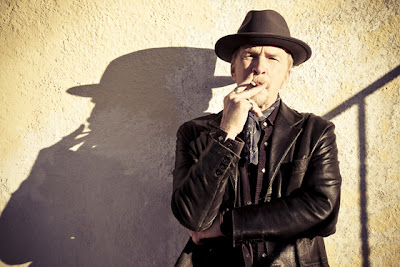 Dave Alvin & The Guilty Ones will be touring the UK in April. The dates are as follows:

The rules Dave Alvin has followed throughout his 24 years as a solo artist were discarded during the creation of his 11th album, Eleven Eleven. For the first time in his career he wrote songs while touring and recorded during breaks on his tours in 2010 with the Guilty Women. He used musicians he had not recorded with since his days in the Blasters, and for the first time ever, he sang on a record with his brother Phil, the lead singer of the Blasters. "While we were growing up there was a firm line between Phil and me," Dave says, referring to Blasters' division of labour: Phil sang, Dave wrote the songs and played lead guitar. "The main reason I decided to have him sing with me was that we’re not going to be here forever; we might as well have fun. Life is too short."

Eleven Eleven features three duets: Phil and Dave on the simmering blues "What's Up With Your Brother"; Dave and Christy McWilson from the Guilty Women on the gentle country number "Manzanita" and the whimsical song, "Two Lucky Bums," the final recording of Dave and his best friend, the late Chris Gaffney. The rest of the material, rich in stories that stretch from R&B royalty to labour history to Harlan County in Kentucky, was written over the course of seven months. As he says with sly chuckle: "The songs are not necessarily true, but they’re all autobiographical. It is the first album in which every song was either written or conceived on the road," Dave says. "When I go on the road, I shut off that part of my brain. It’s really hard for me to write while touring, but I wanted to try something different on this album. Whenever we had a break and I'd return home, I'd call my revolving cast of the regular guys, see who was available to go in and record, cut a song, and head back on tour. With the exception of (the late legendary R&B saxophonist) Lee Allen, I had never used anybody from the Blasters on my solo records. Then I thought, well why not use them?"

While the backing cast varies, the constant through Eleven Eleven is Dave's assured guitar-playing, whether it's finger-picking on an acoustic against an accordion on "No Worries Mija" or blazing riffs on electric over a Bo Diddley beat on "Run Conejo Run." Eleven Eleven reunites Dave with pianist Gene Taylor, whose barrelhouse blues sound has not been heard on an Alvin project since the final Blasters album, 1985's "Hard Line." Taylor was one of several blues veterans who would pass through the band Dave and Phil Alvin founded in their hometown of Downey, Calif., in the late 1970s. Beginning in 1980 with the Blasters' debut album, Dave's songwriting pioneered the marriage of punk attitude with blues, California country and rockabilly. The brothers called it "American music"; it would eventually be labeled by others as roots rock. The Blasters released four studio albums between 1980 and 1985 and Dave's songs "Marie, Marie," "Border Radio" and, of course, "American Music" became staples of the burgeoning genre. Dave's solo career began with 1987's "Romeo's Escape" and in 2000 he won the traditional folk Grammy for his collection of songs from the early part of the 20th century, Public Domain: Songs From the Wild Land.

Soon thereafter he began recording for Yep Roc, which released his last three albums, West of the West, Ashgrove and Dave Alvin and the Guilty Women. "The songs on Eleven Eleven,” Dave says, "are all about life, love, death, loss, money, justice, labor, faith, doubt, family and friendship. The usual stuff." "Mortality has been an issue on my mind ever since Ashgrove.. Since finishing that album, I lost some great friends -- Gaffney, Amy Farris and Buddy Blue of the Beat Farmers. That weighed on me."

The result is an album with songs rich in vivid stories, taking listeners on a bounty hunt in "Murrietta's Head," a tawdry scene of seduction in "Dirty Nightgown" and a true crime recollection in "Johnny Ace is Dead." Dave's guitar work punctuates each tale, reinforcing moments of urgency, remorse and reflection. Despite making the album with different musicians at sessions separated by weeks of time, Dave was consistent in getting a gritty, bluesy feel from start to finish. The studio, and engineer Craig Adams, played significant roles in getting that feel. He recorded the album at Winslow Court Studio in Hollywood, the same studio where West of the West and Ashgrove were recorded, both of which Adams engineered. "Winslow Court is an old Foley studio from the 1930s," Dave says. "It's about the size of Sun Studios and you can have everyone in a circle so you can make eye contact. A lot of the musical dynamics and the arrangement on the record comes just from being able to see each other. If everyone were in a cubicle you wouldn't get that vibe."

It's also the one studio where Dave can place his amp beside him and turn up the volume to capture the essence of a live recording. "All great records, up to a certain point in time, were just a bunch of guys in a room. The Blasters tended to record the same way, but because of concerns of engineers I wouldn't get my amp right next to me. The way Craig won me over was during the recording of Ashgrove. I asked 'mind if I make it louder?' That was one of the few times an engineer has said 'turn it up.'."