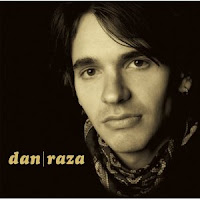 Dan Raza - S/T (Auralee Records)
Hushed vocals that would allow you to hear a pin drop, but on initial spins, there’s nothing dropping here. There is however things blended, as in the kora (a type of bridge-harp, apparently, that sounds like a steel drum) that’s featured predominantly on "On We Go", which joins the organ as if they’ve been blood brothers for centuries. Neither is forced, they just accompany the very pleasant vocal in a way that makes you listen attentively to what’s going on. A very promising opening to the album, but this worldly approach immediately gives way to a bunch of Celtic / Irish sing-a-longs, which simply don’t work, sounding strained and unnatural. Still, the songs are grouped together, which at least makes them easier to avoid.

We do return to Bedfordshire (Dan Raza's home county) with the aptly named "Home, Again", a more English folk orientated song, with a helping of Americana thrown in. The last three tracks that follow all pass quite gently, if not memorably, and there’s the rub. It’s an average outing in the main, and dragged down by the Irish folk interlude in the midst of it. However, if Benjamin Francis Leftwich can somehow break through with his yawn-fest, then there’s hope for almost any singer-songwriter currently out there, Dan Raza included.
http://www.danraza.com/
Kev A.