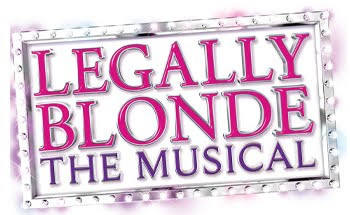 Legally Blonde The Musical at De Montfort Hall
As a man of middling years, I’d suspected from the offset that I wasn’t part of the target audience for Legally Blonde The Musical. This was confirmed when I took my seat to find myself the only male in the row, which was one more than the row in front. Fortunately I’d had the foresight to bring my oldest daughter along, a teen fan of the source film and musicals in general, she was ideally placed to explain the finer points of the performance, but in reality, was next to useless as she spent the best part of two hours laughing, shrieking approval, and wiping away the occasional tear.

When, at the interval, I managed to get a cohesive sentence from her, it was words like ‘amazing’ and ‘marvellous’ that were used. I correctly assumed she was having fun, and to be honest, what’s not to like? The cast, led by Faye Brookes in the Elle Woods role, and ably supported by Iwan Lewis, Niki Evans (from X Factor) and Les Dennis, approach their parts with such unbridled enthusiasm, it’s near impossible not to be swept along by the show. The story, which sticks pretty close to the movie, is simple enough fare, but provides a sturdy enough frame to hang the songs from, which all seem to get under the skin in the way songs from musicals are supposed to.

There’s no doubt about it; I liked the show a lot. I’m not sure I’ll be rushing out to buy the album (as performed by the original London cast), but I do know a certain teenage girl who quite desperate to get her hands on a copy. She wasn’t the only one. When we left, the merchandise stand in the foyer was doing particularly brisk business.
http://www.legallyblondethemusical.co.uk/tour/tour-dates/
Rob F.