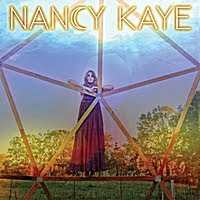 Nancy Kaye - In The Light (ROSEYMUSIC)
I read somewhere that Nancy Kaye’s new album, “In The Light”, had been motivated by a love of David Bowie. There’s certainly a hint of the Thin White Duke’s vocal style to be heard, though perhaps it’s his talent for reinvention that has most inspired the recording. Kaye launched her music career as ‘Rosey’, and quickly signed to Island/Def Jam. Her 2002 debut “Dirty Child,’ earned her the title “The Lovechild of Robert Plant and Rickie Lee Jones” by Entertainment Weekly and other reviewers were universally positive. She featured on the Bridget Jones’ Diary soundtrack, toured with Melissa Etheridge and Morcheeba, and released a jazz album in 2008 called “Luckiest Girl”.

In 2009 she released Lal Meri, named after her band, and founded the Creek Kin music collective, which brings us back to “In The Light”. Released in February 2012, its mix of psychedelic folk and soulful pop sounds utterly contemporary, though obviously informed by pre-glam Bowie, and female singers such as Zoe Pollock and Grace Slick. It works so well because Kaye is adept at mixing those old-school influences with modern techniques. For example, take the scattergun percussion of “Still”, the big pop production of “Dream Journal” or the head-down beats of “Time”. Best of all, the haunting “Keep Falling” and the CSN referencing “Cut My Hair” – you don’t get to hear acid banjo everyday.
http://www.roseymusic.com/home/
Rob F.