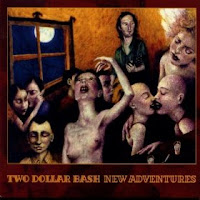 Two Dollar Bash - New Adventures (Cannery Row Records)
Hey hey, my my! Having just released his solo album 'The Cactus And The Dragon' (reviewed for Leicester Bangs recently by yours truly), here’s Mark Mulholland again, together with Matt De Harp and Joe Armstrong, who make up Two Dollar Bash. There’s a strong cast of ten in the wings as well, who all contribute something to what I can only describe as glorious, ramshackle (in an off-the-cuff way) Americana. The album could have been made yesterday, as the title track and "Take It From You" demonstrate, with such a freshness about them, all bright and shining; or half a century ago (a century ago even!), as "Floating Through" (my favourite as I write this) and "Blame It On Me" reveal their heritage. The tracks tumble out of the speakers, paying no heed to building up a sound, as if the band just turned up, tuned in, and decided to play whatever came to mind from their own personal repertoire... or so it seems. Yes, all of these tracks are written by them, all are original, individually penned by one of the band, and shared in the making.

There’s nothing on here that’s overly derivative ("San Francisco Morning" reminds me of The Schramms, mainly the string arrangement and the vocal, and somewhere else I caught a glimmer of John Prine, but that’s it). There’s nothing on here that is second rate. These fourteen songs are pure, heartfelt beauties, of a matchless, quirky variety, with quality assured, with that ever so slightly shambolic edge that enhances the authenticity of the music. Pure joy, pure and simple.
http://www.canneryrowrecords.com/
Kev A.