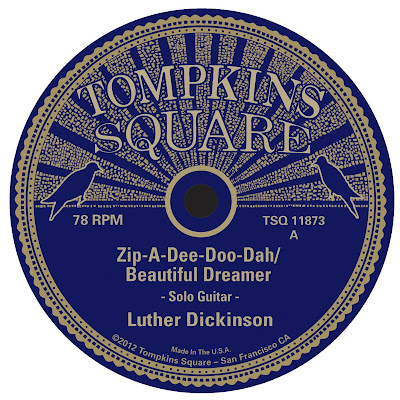 San Francisco-based record label Tompkins Square announces the first in a series of releases in the 78 rpm 10" vinyl format.

The first two will feature previously unreleased recordings from Luther Dickinson (North Mississippi Allstars), and Ralph Stanley. Both 78's will be released as a limited edition of 500 copies on Record Store Day, April 21, 2012.

Luther Dickinson plays medleys of Southern melodies on his 78, including "Zip-A-Dee-Doo-Dah/Beautiful Dreamer" on the A side and "Nobody Knows The Trouble I've Seen/Peace in the Valley" on the B side. Ralph Stanley's 78 features "Single Girl", with "Little Birdie" on the B side.

Tompkins Square owner Josh Rosenthal comments, "A lot of new turntables play 78's, and many 78 collectors listen to their records on modern equipment. Tom Waits, Elvis Costello and Nick Lowe have all recently released 78's. So I thought it would be fun to start a line of them."

The label will also release a white label 45 of Hiss Golden Messenger's "Jesus Shot Me in The Head" from the forthcoming album 'Poor Moon', b/w the unreleased "Jesus Dub," on Record Store Day.