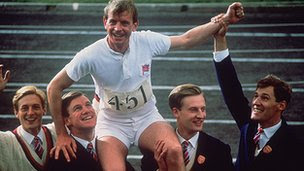 Oscar-winning 1981 film Chariots of Fire is to be brought back to the big screen ahead of this summer's Olympics.

Twentieth Century Fox and the British Film Institute (BFI) are working to digitally re-master the film, directed by Hugh Hudson.

The film tells the true story of two runners who compete in the 1924 Paris Olympics despite religious obstacles.

It will be shown at more than 100 cinemas around the country from 13 July as part of the London 2012 Festival.

Although the film is 31 years old, producer Lord Puttnam believes the message is still relevant.

"Chariots of Fire is about guts, determination and belief. At the heart of the film is the quest for Olympic glory, and I find it hard to imagine anything more likely to resonate throughout the country this summer," he said.

The BFI is allocating £150,000 of its lottery funding to support the film's release across the country, widening its reach beyond the London 2012 Festival.

The festival will also feature a new film by Bafta-winning Senna director Asif Kapadia - The Odyssey - which will explore the relationship between London and the Olympic games.

It is the last of four short films commissioned especially for the festival.