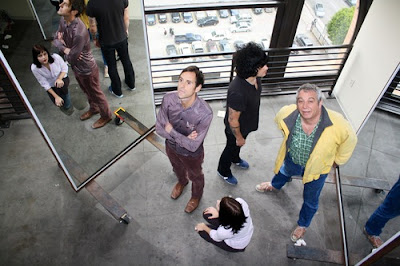 "Epic swells of tension that give way to tasty arrangements of some sort of hybrid psych prog 60's hash den house band hell bent on blasting off straight up to the heavens." - Permanent Records

Anywhere began as a LA/SF collaborative project started by musicians Christian Eric Beaulieu and Cedric Bixler Zavala. Fresh off years of writing and touring as co-founder of Bay Area acid punk extremists Triclops!, Christian decided to immerse himself in the resonant universe of acoustic guitar and began performing solo under the moniker Liquid Indian. In early 2010 while in Los Angeles to perform at an art opening of mutual friend artist Sonny Kay, he befriended Cedric (singer of The Mars Volta) who was a DJ for the event. The two exchanged numbers and planned to record something acoustic rooted in the open tuning, eastern raga style Christian was delving into. Months later the pair met in Los Angeles, enlisted the mobile engineering talent of Toshi Kasai (Big Business) and tracked the new material in 2 days at The Melvins practice space in downtown Los Angeles. During that same visit Christian played live on "The Watt from Pedro Show" as the musical guest of Mike Watt (of The Stooges, fIREHOSE, Minutemen).

After the show before leaving San Pedro, Christian realized they needed bass for the recordings and boldly asked Watt if he'd contribute. Watt agreed immediately and a few months later delivered the entire projects bass tracks. Returning to San Francisco, Christian decided to reach out to vocalist Rachel Fannan, who had recently parted ways with Bay Area psych rockers Sleepy Sun and had relocated to Los Angeles. Having never met Christian before, Rachel generously contributed vocals to two of the songs, while Cedric performed vocals on three tracks leaving the rest to exist as instrumentals.

While searching for a label to release the album, Christian solicited the talent of SF psychedelic poster artist Alan Forbes. During a meeting to discuss art concepts, Alan revealed that he, along with his Secret Serpents business partner Justin Mcneal, had started a label called Valley King Records. They agreed to release a pair of singles as a series of limited edition silk screened cover 7"s, all signed and hand numbered by Forbes.

The music captured on this material is an ethereal, resonant execution of what could be described as eastern acoustic punk. Likened to the voyeurism of Sandy Bull, Sir Richard Bishop, or Jack Rose style raga's reinterpreted at times with Drive Like Jehu, Minutemen punk velocity, other moments emotionally spiraling toward a haunting ethereal beauty akin to Vashti Bunyan lost in the desert of a desolate western. Blending acoustic and minimal electric guitars with a multitude of percussion instrumentation, digital tabla machines, sci fi electronics and feedback, this avant garde collective of envelope pushing splatter artists have created a new presence. Modern mantras of electric silence that fuse consciousness into a recording of vibrant, transitional material blending geographic as well as cultural diversity. The sound of stillness amidst chaos, light below the depths, dancing full circle into the center of what could only be called Anywhere.