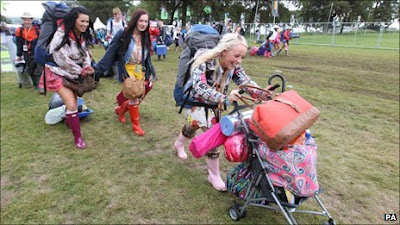 Figures from the music industry indicate that earnings from Scotland's music festivals have almost trebled in the past six years.

PRS for Music, which represents writers and publishers, said live performances have become an important driver for Scotland's tourism industry.

The figure of 185% earnings growth is almost four times higher than that for the UK as a whole.

The fastest growth was reported in smaller "boutique" events.

Will Page, chief economist at PRS for Music, said: "What you're seeing is that big festivals like T in the Park are as big as they can be.

"Boutique festivals are cropping up everywhere - Knockengorroch in the southwest of Scotland, for example - and that's actually driving this growth."

Throughout the world, the music industry has undergone a period of rapid change.

Historically, live performances have tended to be seen as a promotional activity for most acts, often losing money.

Substantial earnings were made on the sale of recorded music.

But a decline in physical sales, such as CDs, has led to earnings from live performance overtaking recorded music as a source of income for most musicians.

PRS for Music believes the strength of the Scottish music business is also reflected in international earnings for writers and publishers.

The United Kingdom is one of just three countries in the world which collects more in music royalties from abroad than it pays out to foreign rights holders. The other two are the USA and Sweden.

Figures analysed by PRS for Music suggest that songwriters and music publishers based in Scotland derive 40% of their royalties from international sources, a greater proportion than for the UK as a whole.

Will Page explained: "If Amy Macdonald is a big hit in Germany, which she is, money will be collected from the radio and TV play and sent back to the PRS which will then send that to Amy Macdonald.

"What we've seen is a disproportionate amount of money that's going to Scottish postcoded members of the PRS from the international arena and that ultimately stresses that it's an export success story.

"The work that our songwriters do exports overseas incredibly well."

The industry believes more could be done to exploit Scotland's strengths in producing successful music.

It has drawn attention to the example of Canada, which also supports a distinctive music scene in spite of the presence of a much larger neighbour.

There, a programme called Factor helps acts with everything from the cost of fuel for a tour van to major international marketing campaigns.

Mr Page stresses that it is not a model built around public handouts.

He said: "I guess you could use the term public-private partnership here.

"It actually began with the private sector first then, interestingly, the public sector came in second."

You can hear more about Scotland's music industry in Business Scotland at 10:05 on BBC Radio Scotland on Sunday 25 March.