Yes, Prime Minister to be revived... 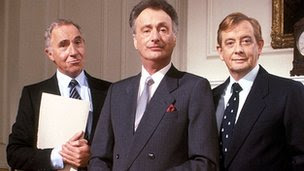 Satirical 1980s comedy show Yes, Prime Minister is to be revived for a new six-part series.

Original writers Jonathan Lynn and Antony Jay will pen the new show, based on their 2010 stage production.

The series, which will be seen on TV channel Gold, will see Prime Minister Jim Hacker back in office leading a coalition government.

Casting of the Prime Minister - originally played by Paul Eddington - has yet to be announced.

Gold said the updated Hacker would tackle the economic crisis, a leadership crisis with his coalition partners and a Scottish independence referendum.

"The political landscape in Britain today is the perfect setting for Yes, Prime Minister to return," UKTV's Jane Rogerson said.

Mark Freeland, head of BBC In-House Comedy which is producing the series, added: "The much extended tour of Yes, Prime Minister in theatres up and down the country proved that this iconic comedy has lost none of its satirical bite."