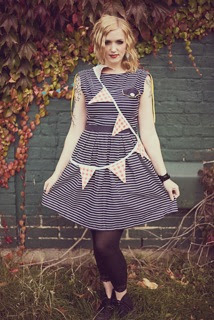 She Makes War is the gloom-pop solo project of Laura Kidd – multi-instrumentalist, visual artist and digital polymath. Having graced stages across the world playing bass and singing for Tricky, A-Ha, I Blame Coco, The Young Punx and Alex Parks, Kidd released debut album 'Disarm' in September 2010 accompanied by five quirky handmade videos and follows up its DIY success with this new collection of carefully crafted, powerful alt-pop songs.

‘Little Battles’ was co-produced by She Makes War and Myles Clarke (Sparkadia, Kid Harpoon, Belakiss) in the summer of 2011. Recorded just around the corner from the Hackney riots, London's crackling tension is echoed within the 15 songs but if love is a battlefield this album is a peaceful protest – honest and vulnerable yet steely and sure of itself, all melancholy romance and wide-eyed hope for the future.

Driven by Kidd's bewitching, pastoral vocals and layered guitars and supported by a plethora of additional instruments from ukulele to autoharp, melodica, piano, violin, harp, saxophone and three part recorder ensemble, the songs are punctuated by a patchwork of field recordings from her global travels as hired gun. The album opens to the sound of a Japanese mountaintop tannoy and closes on a summer rain shower in South London, bells chime in Mexico and Buenos Aires, breakdancers throw themselves around a New York subway carriage and news helicopters circle Mare Street – and within the world of She Makes War this all makes perfect sense. It's about collisions - analogue with digital, war with peace and technology with nature.

“a fiercely independent spirit who makes music on her own terms and is the perfect example of digital DIY – a modern musical Boudica who won’t take no as an answer and sings these dreamy, heartfelt songs that envelop you with their raw beauty and textural melodies.” - John Robb, Louder Than War

"Imagine appealingly grainy angst-pop à la Blood Red Shoes shot through in leftfield with the conceptual imagination of someone like Melissa Auf der Maur, and you’ll get somewhere close to She Makes War." - Wears The Trousers

"a multi-instrumentalist with such an enchanting voice..." - Nemone, 6 Music