Review: Joy As A Toy 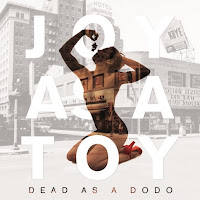 Joy As A Toy – Dead As A Dodo (Cheap Satanism Records)
Inspired by the pulp horror soundtracks of Dario Argento, Ennio Morricone, Zombi and Goblin, “Dead As A Dodo” started life as a project to accompany the first ZomBIFF night staged at the Brussels International Fantastic Film Festival. It’s the second full-length album of what Joy As A Toy describe as “Vampire Rock” or “Wasted rock ’n roll Beach Boys with a bad English accent”.

Like the horror genre itself there are the usual motifs, including instructive narration on how to kill a zombie by shooting it in the head, much analogue synth, abrasive and angular stabs of sound and stormy samples, whilst never taking itself too seriously. The album gets better as it progresses, where the highlights are the low key and sinister accordion led “Hot Water (Acid Trip)”, the complex jazz, muffled screams, clichéd horror lyrics and intricate electronics of “Robots”, and of course “Zombie Safari”, with its ‘60s beat exotica, bon tempi high-octane rhythm and expansive prog-jazz, it contains as much cheese as B-Movie classic… a winner!
http://www.cheapsatanism.com/?lang=en
Willsk
Posted by Bangs at 3/31/2012 09:34:00 am