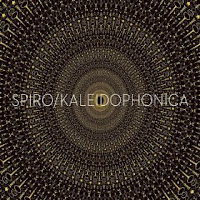 Spiro – Kaleidophonica (Real World)
Bristol based Spiro made lots of friends and fans with their 2009 album “Lightbox”, where they took regulation folk instrumentation – violin, mandolin, guitar and accordion – and set off down less travelled musical pathways. Progressive and modern classical influences were absorbed and assimilated, and the results were complicated, trance-like and wonderfully contemporary. Folk music, but not made by folk ‘round here.

It’s all the more impressive when its live production is taken into consideration. Overdubs are avoided and what we hear is a moment captured in time. The combination of original pieces and traditional tunes hang together particularly well, though the latter are often snared within the former and effortlessly morph. As with overdubs, gratuitous soloing is conspicuous by its absence, as if each individual player is both secure in their own ability to stretch the sound into new and interesting shapes without the need to show off.

They get compared to everyone from Steve Reich to Penguin Café Orchestra, but they’re altogether more approachable. For all their repetition, wayward instrumental flights and askew rhythmic plays, they’re entertainers at heart, and “Kaleidophonica” is never difficult or arduous.
http://realworldrecords.com/
Simon M.