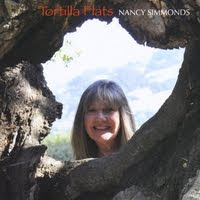 Nancy Simmonds - Tortilla Flats (Joe Tucker Records)
Born in London, Ontario, Nancy Simmonds began her music career when she moved to Ontario in the early 1970s. She worked with Leonard Cohen, shared bills with JJ Cale and signed a publishing deal with Chappell Music Canada. She was an original member of Prairie Oyster and continued to perform with her own Nancy Simmonds Band. In the mid-1980s she left Canada for California, got involved with animal rescue, and released a series of canine related CDs. Her songs have been covered by Alannah Myles, Melissa Manchester and Ricky Van Shelton, amongst others, and she was the 2010 winner of USA Songwriting Contest. I think I can state, without fear of contradiction, Nancy Simmonds has paid her dues.

Her new record “Tortilla Flats” is a thoughtful, tenderhearted collection of songs, which often look back at specific times in Simmonds’ life, and the result is both gentle and nostalgic. The collection begins with “I Miss Those Jersey Boys”, a song about neighbours and moving on. The title track reminisces about much the same - the people who live around us, friendship and community. “It's Awfully Nice in Paradise” is a love song to Santa Barbara, and won Simmonds her songwriting prize. It’s no mystery why, with its near perfect structure, pop hooks and narrative, and “Nothing Changes” concentrates on the big picture but without sacrificing the personal perspective. Now back in Canada, I wonder if she felt the need to get “Tortilla Flats” recorded before time began to play tricks. Whatever her reasons, I’m glad she did.
http://www.nancysimmonds.com/Nancy_Simmonds/NANCY_SIMMONDS.html
Rob F.