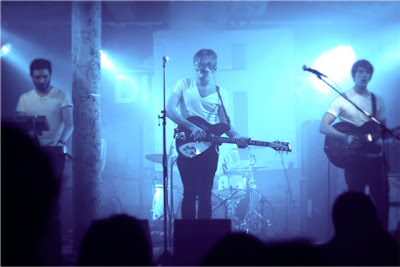 Scottish Indie rock band Holy Esque have announced plans to release their self-titled debut EP on April 23rd The EP will be available digitally on iTunes and on limited edition CD at upcoming shows.

The band began playing shows throughout the UK in less than six months of their inception. After posting a few demos online, word spread rapidly about the enigmatic band’s intense sonic morass of distortion and atmospheric soundscapes, landing them coverage on numerous blogs including an NME Radar Tip who said ”HE really benefit from that everything up to ten factor, but also know their way around a riff that kinda sounds like classic Bunnymen played by James Dean Bradfield….you'll be needing to play this loud.”

In early 2012, Holy Esque entered the DIY Pink Megic Studios built in a flat in the Southside of Glasgow with producer Kevin Burleigh (Glasvegas, Simple Minds, Supernaturals) to record their debut self-titled debut. Armed with big riffs, thick crunchy bass lines and perhaps one of the most unique, yearning vocals heard in years, Holy Esque meld post-punk and 90’s alternative rock influences with skillful ability on their debut. Featuring driving indie rock anthems like 'Rose' and 'Ladybird Love', the EP is an incredible introduction to Glasgow’s most promising new band.

Holy Esque are confirmed to perform at Tallinn Music Week in Estonia this weekend and will hit the road in April for a EP release tour in the UK.