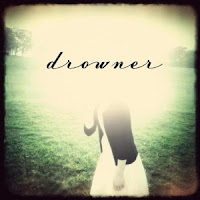 Drowner - S/T (Saint Marie Records)
Houston, Texas - home to all things American, I'm sure, and all things Texan, I'm certain. Named after General Sam Houston, it is the fourth largest city in the USA, with 2.1 million inhabitants. Just four people from this huge populace make up Drowner, and all of us who have a penchant for music that is, in equal parts, delightful and daring, should rejoice. This quartet's indie sound has a base camp in shoegaze, a path up to dreampop, and a flag planted firmly in reverb post-rock. They have managed to blend all three together, with a dash of psychedelic space rock (Houston is Space City, after all), thus making some quite marvelous music. To coin a popular phrase of the moment: What’s not to like?

This album is an expanded version of a previous EP, thus we find that at least two of the band (multi-instrumentalist Darren Emanuel and vocalist Anna Bouchard) have been refining their work over a three / four year period, and are now ably assisted by more recent band members Sean Evans (guitar) and Mike Brewer (bass). I don't know how they came to choose the band name, but it’s an apt one. You can almost drown in the sound that they create, a wash and swirl of creative noise that never really becomes a blast, or squall, of noise, remaining a pillow for the voice, a cushion of sounds crafted to blend and entwine with all things melodic. Think Catherine Wheel playing My Bloody Valentine in a very thoughtful way, and maybe you get some idea of their combined creative interests, and their direction.

The last two tracks are remixes. “Chime (Apples To Earth Remix)” is fine, as we still get Anna's vocal in the mix, but "Never Go Away (Nikki Gunz Remix)" is a flatulent, synth led downer (rather than Drowner…). So, apart from that one misstep, I love it, and they probably had me in mind when they dreamed it all up. Hey, I can dream too, can't I?
http://www.saintmarierecords.com/
Kev A.