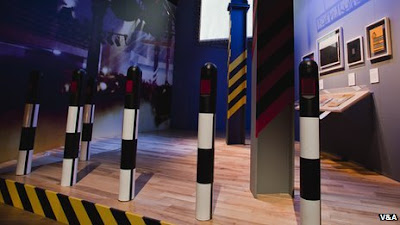 Parts of the famous Manchester nightclub The Hacienda have been recreated for a design exhibition.

The club's dancefloor, bollards and trademark striped girders are all featured in the exhibit at London's Victoria and Albert museum.

It forms part of the museum's British Design 1948-2012 show, which showcases design since the 1948 Olympics.

The Hacienda was founded in 1982 by music svengali Anthony Wilson and members of the band New Order.

It was a focal point for Manchester's music scene until its closure in 1997 and hosted performances by many of the city's "Madchester" bands in the late 1980s and early 1990s.

The club was funded by Wilson's legendary record label Factory, which released the music of New Order and Happy Mondays amongst others.

The bar was named after Harold "Kim" Philby, a British intelligence agent who was revealed as a member of the Cambridge Five, a spy ring based at the famous university who collected information for the Soviet Union during the Cold War.

Also included are examples of Saville's work for Factory, such as the cover for Joy Division's Unknown Pleasures and a poster for the label's original The Factory club night in Hulme, Manchester.