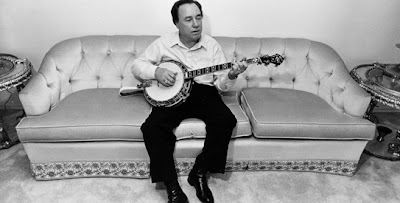 The musician died of natural causes at a Nashville hospital on Wednesday, his son Gary said.

Scruggs was known for his unique banjo playing technique, which involved just three fingers. It later became known as "the Scruggs picking style".

His innovative method can be heard on the theme tune to the 1962 series The Beverly Hillbillies.

Scruggs rose to prominence when Bill Monroe hired him to play in the Blue Grass Boys, one of the defining groups in the bluegrass musical genre.

"When the singer came to the end of a phrase, he filled the theatre with sparkling runs of notes that became a signature for all bluegrass music since," he said.

"A grand part of American music owes a debt to Earl Scruggs. Few players have changed the way we hear an instrument the way Earl has, putting him in a category with Miles Davis, Louis Armstrong, Chet Atkins, and Jimi Hendrix."

Scruggs later teamed up with Lester Flatt to form the Foggy Mountain Boys, also known as Flatt and Scruggs.

One of their most well known records included Foggy Mountain Breakdown, which featured in the 1967 movie Bonnie and Clyde.

It was their recording of The Ballad of Jed Clampett that was used in The Beverly Hillbillies.

They eventually disbanded, and a rift grew between the two musicians, although they were inducted together in the Country Music Hall of Fame in 1985.

Scruggs went on to form a group with his three sons in The Earl Scruggs Revue, playing alongside rock acts such as Steppenwolf and James Taylor.

In 1992, Scruggs was among 13 recipients of a National Medal of Art.

Speaking at the time, he said: "I never in my wildest dreams thought of rewards and presentations. I appreciate those things, especially this one."

In 2001, he released his first album in a decade, Earl Scruggs and Friends, featuring collaborations with other artists including Sir Elton John, Dwight Yoakam, Sting and Melissa Etheridge.