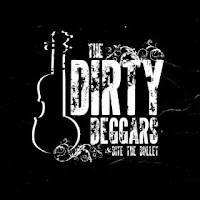 The Dirty Beggars - Bite The Bullet (DimeRock Records)
It’s never easy for a European act to acquire credibility as a country act, full stop. But for a Scottish band to offer themselves up as genuine exponents of bluegrass, that purest of country forms, seems almost like artistic suicide. We can probably agree though that if that same Scottish bluegrass act were to be chosen to open for Kansas City’s finest, The Wilders, then they must be cutting at least some of the mustard. How the genre’s fundamentalist wing will take to Scotsmen singing with hillbilly accents I’ve no idea and probably don’t want to be there when the answer comes through; but to these simple ears it’s hard to knock what The Dirty Beggars have presented with Bite The Bullet.

The playing is tight and seductive, with all the richness you might expect from seasoned players raised on a rich diet of Bill Monroe, and the songs sound like to real deal to boot. So while it might lack the authenticity of Gillian Welch or Del McCoury it certainly doesn’t lack harmony, proficiency or charm; and once or twice (as in the Celtic fiddles which introduce ‘Calm Before the Storm’) shows flashes of individuality that promote the band above the level of homage. As a tester ‘Underneath the Sky’ is worth checking out, a lovely song with luscious instrumentation and some gorgeous harmonies.
http://thedirtybeggars.com/
Neil B.