Liars announce details of a new album and live dates for June 2012... 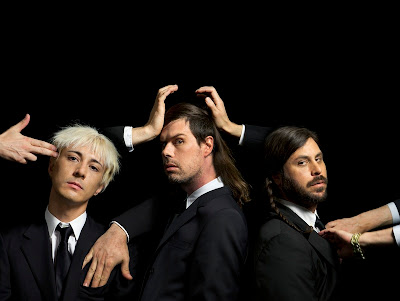 Liars have announced the first details of a new album, out on Mute on 4 June 2012, this is their sixth studio album and the follow up to 2010’s critically lauded 'Sisterworld' which was The Quietus’ Album of the Year and #9 in NME’s Albums of the Year who said of the album "...this incredible album is your passport to a better place.”

Liars (Angus Andrew, Aaron Hemphill and Julian Gross) will return to Europe this summer for live dates including Field Day on 2nd June, and a series of intimate shows, including London’s XOYO on 12th June and Manchester’s Ruby Lounge on 15th June (full listings below).

The new album announcement follows a series of clips which the band recently uploaded to their Tumblr (http://amateurgore.tumblr.com/), giving rise to much speculation on where this ever evolving, ever influential band were headed.

The new album recording saw the band working more collaboratively than on previous records, and began when Angus Andrew and Aaron Hemphill moved into an isolated cabin in the mountains to begin writing. Recorded in LA, self-produced by the band with additional production from Daniel Miller, and mixed by Tom Biller, the album is hard to shake, tough to pin down, and impossible to get out of one’s head even after an initial listen.