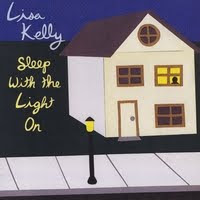 Lisa Kelly - Sleep With The Light On (Independent)
Lisa Kelly has been an on/off musician for nearly five decades (she started young), over the years playing keyboard and guitar for a number of groups, including The Toby Mountain Band, Billy and the Boys, and most recently, Dan Wills and the West Coast Country Road Show. Over the course of her career she’s gigged all over the USA and large parts of Europe.

Her debut album, 2005’s “Into The Fire” was recorded after a ten-year musical sojourn, and a rediscovery of music via open mic sessions and playing for friends and family. Now, some seven years later, she’s recorded and released its successor, “Sleep With The Light On”. Blessed with a voice that will remind some of alt. country songstress Laura Cantrell, Kelly is, at heart, a singer-songwriter, and she frames words within a full-band, rootsy folk-rock setting.

Raised on the songcraft of Lennon and McCartney, Neil Young, Cat Stevens and Todd Rundgren, there’s undoubtedly a pop edge to much of Kelly’s writing, which results in a collection of songs that stick in the memory long after the music has stopped. “Anything Can Happen” possesses a charming hook line, double tracked and with triple appeal. “Seven Braids” leans heavily, and quite agreeably on the British folk tradition and “So High” rolls along with real vigor. The album ends with the captivating country pop of the title track. Good work.
http://www.lisakellymusic.com/
Rob F.