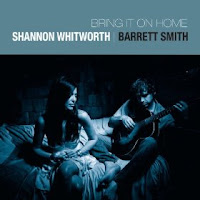 Shannon Whitworth and Barrett Smith have been playing together for a while, as a duo and as part of the Shannon Whitworth Band. This is the first time they’ve recorded as a pair, and “Bring It On Home” is a collection of favourite songs, written and recorded by other people, from Sam Cooke and Tom Jobim, to James Taylor and Paul Simon. Strictly speaking it’s a covers album, though it completely transcends that slightly derogatory description as the duo consistently stamp their rootsy, relaxed personality on each song, through clever arrangements and a warm, thoroughly engaging production. They’ve also wisely avoided recording an album of just standards, and the combination of the slightly obscure and the almost familiar, together with an eclectic song selection from differing genres is to be applauded.

If you’re going to start an album of this sort anywhere then Sam Cooke’s “Bring It On Home to Me” is as good a place as any. Smith’s vocal takes lead but it’s a harmonious production, and not for the last time, their entwined vocals demand our attention. “I Get Ideas (When We Are Dancing)” – originally by Julio Cesar Sanders, with English lyrics by Dorcas Cohran, and made popular by Tony Martin – is beautifully tender, suggestive, and understated, and will remind some of the classic recordings of Les Paul and Mary Ford. There’s nothing here that can be described as a straight copy. They bring so much of themselves to each recording, and it’s to their credit that can take songs as stylistically dissimilar as Dean Martin’s classic “Sway” and Van Morrison’s “I'll Be Your Lover, Too” and almost make us forget the originals. Of course, not everything works quite so brilliantly, but the couple of missteps in no way diminish either the achievement or the listener’s enjoyment.
http://shannonwhitworth.net/
http://www.barrettsmith.com/welcome.cfm
Rob F.