Crosby Garrett Helmet to be part of Royal Academy exhibition 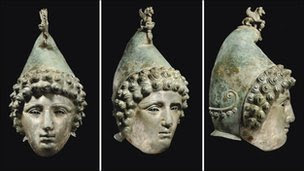 A Roman cavalry helmet bought for £2.2m at auction after it was discovered in a Cumbrian field is to go on public display for the first time.

The Crosby Garrett Helmet, named after the village near where it was found, is to feature as part of a Royal Academy show called Bronze.

A private collector outbid a Carlisle museum at the auction in 2010.

Bronze co-curator David Ekserdjian said the helmet, which is almost 2,000 years old, was a "masterpiece".

He said: "Even if this helmet had been known about for as long as anybody can remember, we'd still want it in the show because it's a fantastic work of art.

"But the fact that it came out of the ground in 2010 doesn't fail to add to its interest and appeal.

"This is a masterpiece that we didn't know about until recently and that's absolutely thrilling. That combination of quality and novelty is a win-win."

It would have been worn for cavalry sports rather than battle.

Mr Ekserdjian added: "It's stunning. It's one of the stars of the show, one of the phenomenal pieces and seeing it with all the other pieces just confirms its greatness."

Other highlights at Bronze include the severed head of King Seuthes III, excavated in Bulgaria eight years ago and never seen in Britain before, and the 14th Century BC bronze and gold Chariot Of The Sun from Denmark.

Bronze runs at the Royal Academy Of Arts from 15 September to 9 December.