Review: The River Has Many Voices – I We Us Are Was Were Is 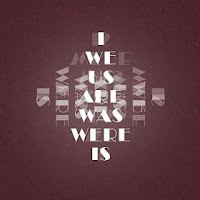 The River Has Many Voices is one Matthew Payne, a native of North Carolina, and now residing in the hills around Austin, Tx. His website reveals a list of artists who have provided inspiration, most of whom are literary, though Bob Dylan and Townes van Zandt also feature. Their inclusion offers some clues as to how Payne has evolved as a songwriter, and I’m sure there is a debt to pay, but their influence is far from obvious on his debut album. Indeed, the sound and style of “I We Us Are Was Were Is” is utterly contemporary, and individual songs wouldn’t sound out of place on radio programmes where artists and groups such as Fleet Foxes, Bon Iver and Mumford And Sons are heavily featured.

As the new indie-folk revival gathers pace, Payne will surely find his place at a top table. There’s a dreamlike quality present throughout the record, which provides instant, lasting comfort and reassurance. The warmth of the production and the instrumentation, which includes keyboards and strings, offers misty backing to the songs of love, loss and constant change. The opening number “Simple Mornings” is fragile and delicate, and quite beautiful. Piano takes the strain, and a lonely harmonica adds detail. “Our Forever Is Now” seems somehow simpler, but perhaps it’s just a shift of focus to the song, and “The Changes” follows a similar, successful route. It ends with “I'm Gonna Love You Anyway”, and epic heartbreaker, flawlessly realized, it closes the collection on a substantial, significant high.
www.theriverhasmanyvoices.com
www.matthewpayne.bandcamp.com
Rob F.