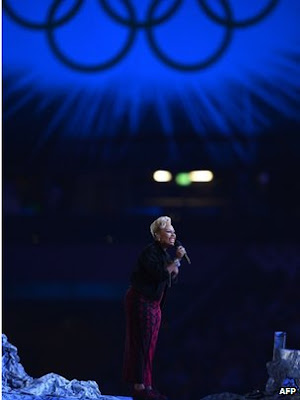 The music featured in the opening and closing ceremonies of the London 2012 Olympics has sparked a big surge in sales.

According to industry figures, the events boosted downloads and sales by a retail value of £2.2m.

There were nearly 250,000 extra album sales after the two showcases for British music, and just under 500,000 additional music track downloads.

Analysis of sales in following weeks by BPI, which represents the British recorded music industry, showed the big winners included Emeli Sande, whose album surged past Adele as the best seller of this year so far.

Sande's song Read All About It Part Three, had sold 449 copies in the week leading up to the closing ceremony, but the Aberdeenshire singer sold 45,000 copies in the following week.

There were even steeper increases in sales for Kate Bush, with Running Up That Hill, beaten in the percentage increase only by The Who, with See Me Feel Me.

Nearly quarter of the tracks in the top 100 singles chart in the week after the closing ceremony on 12 August were songs performed at the event, including three in the top 10.

After the opening ceremony, the big winners in sales included I Still Believe by Frank Turner, Brian Eno's An Ending, Chemical Brothers' Galvanize, and Tubular Bells, performed by Mike Oldfield.

In album sales, which include digital downloads as well as compact discs, 24 of the top 100 chart after the closing ceremony were by artists who performed or had songs included in the event. Five of those were in the top 10 albums; Emeli Sande, Elbow, Ed Sheeran, Jessie J and One Direction.

Two compilation albums were launched after the events. Isles of Wonder, based on the opening event, was ninth biggest selling compilation album last week, having reached the number two spot, while Symphony of British Music, featuring acts from the closing, is at 17.

More than 50 pieces of music were played at each of the ceremonies. The close, on August 12, featured more live performances, and was found to have a bigger impact on sales than the opener.