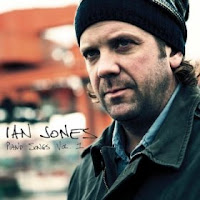 Back in the ‘70s piano songs were all the rage. Singer-songwriters like Elton John and Carole King were selling millions, and many artists followed their lead, without necessarily registering the sales. Inevitably, the instrument soon fell out of fashion again. It’s not an easy piece of equipment for the gigging musician, small venues rarely have one on site, and when they do they’re always out of tune. As the ‘70s gave way to the ‘80s guitars and synthesizers ruled the roost.

Ian Jones certainly didn’t intend to record a piano-based album. He’d written over 30 songs for a new project, of which only ten or so involved sitting down, but fortunately he had a producer with good ears who was unafraid to express an opinion. Justin Cronk (Vendetta Red, With Friends Like These, Ships) suggested they should go for something a bit different, and “Piano Songs, Vol. 1” is the happy result.

Jones brings a wealth of experience to the recording (he’s been an active musician for two decades) together with a love of folk, country and rock music. Those influences serve him well here, and add considerable variety to both his songwriting and arrangements. He’s also ably assisted by a talented house band that inhabits the background, but provides an abundance of musical depth to the recording. It maybe an indie release in name, but the sound is always skilled and bright. Never slick, but utterly professional.

The album begins with the Beatles via Oasis-esque “Sweet Today”, though Jones takes it to another level with his soulful, emotive voice. “Dream of You” reveals a little Ryan Adams influence at play and “Sweet Sensamilla” is dense with assorted keys and a rolling rhythm. Perhaps he’s at his best when he slows things down on tracks like “Taken for a Fool” and “I Know This Time You're Leaving” but to be honest, he doesn’t do much wrong over the album’s 43 minutes. Fans of all the above, from The Beatles to Carole King, should take some time out and listen.
www.reverbnation.com/ianjones
www.facebook.com/pages/Ian-Jones-Music
Rob F.