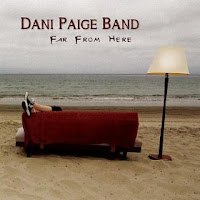 What a voice! Dani Paige is blessed with a soulful, full-throated roar that transforms into a coquettish purr, as and when required. It’s a particularly powerful instrument when wedded to the bluesy, soul-rock that her band plays. “Far From Here” is their second album – it’s been four long years since their debut “Love That Fire” made critical waves in their home state of California – and they’ve effortlessly avoided the sophomore slump that effects to many bands. It’s an album that seems to hark back to simpler times, when grown-up rock ruled the airwaves, and a major label would get behind a band and their record, providing them with proper support and sending them off on national and international tours. It’s harder now, and music fans have to make more effort tracking down the good stuff, though it makes the rewards all the sweeter.

The high-flying opener “Baby (You Don't Come Around)” is ballsy and direct, and offers an instant opportunity for Paige to let rip. She doesn’t disappoint. Comparisons have been made to Joss Stone, but over these 11 tracks, Paige feels altogether more authentic, and genuinely connects with the material. I’m not sure if she’ll thank me, but I’m personally reminded of a female Frankie Miller in the way they both stamp their authority on a song and make it their own; and they’ve both got great soul voices that rock. Guitarist Jesse DeCarlo co-writes the songs and leads the band, and they compliment each other perfectly. The title track is an elegant stand-out, it ebbs and flows in a most satisfactory fashion. “Runaway Baby” sounds like a classic radio hit and “I Surrender” adds a little funk to their soul. Finishing with a minute of Paul Simon’s “Diamonds On the Soles of Her Shoes” – it’s unexpected and a delight.
www.danipaigeband.com
www.facebook.com/danipaigeband
Tony S.